The Christy Media team is looking forward to tonight’s England match and we’ve been enjoying the other matches so far in what promises to be an exciting and unpredictable tournament!

Here’s some snaps from in and around the public areas of the International Broadcast Centre (IBC) in Moscow.  The IBC is a temporary hub for broadcasters during major sporting events and it is where the host broadcast feed for the 64 matches will be processed, monitored and beamed to TVs, radios and digital devices in more than 200 territories around the world.

“The IBC is the 13th ‘official venue’ of the FIFA World Cup, beside the 12 stadiums; but in terms of audience, it is in fact the first,” said the FIFA President, Gianni Infantino, at the IBC opening on 9 June. “The entire world will be able to benefit from this beautiful and fantastic FIFA World Cup thanks to what is happening here in this IBC. For the best ever FIFA World Cup, we have the best ever IBC as well.”

We can’t wait to view the IBC’s feed for the England game this evening and wish the broadcast team behind it a hitch-free event – we don’t want to miss a minute of the match! 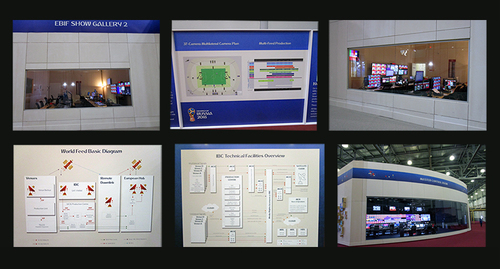